The centre named after Late Lion Isaac Olusola Dada, the visioner of the project who died in 2017, in fulfilment of the late district governor’s dream to give a standard dialysis centre towards health care of mankind’s before his demise. 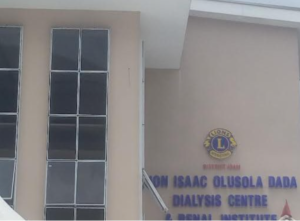 At the handling over ceremony, the District Governor of Lions District 404A1, Nigeria, Lion Fortune Wagbatsoma said public health institutions like LUTH needs to be supported to cope with astronomically high patient traffics. Adding that Lions District 404A1 will continue to support government hospitals by providing similar facilities for the benefit of the larger society. ‘On our part, you can be assured that we shall continue to support this facility while expanding our other interventions such as the on-going National Diabetes Screening Programme, which has taken us to 11 states already,’ she said.

The District Governor said the facilities being donated to LUTH are equipped with cutting edge technology to guarantee positive outcomes for most patients. She disclosed that the donation of Renal Facility to LUTH is the third that the district has provided for public use in the last two years. She appealed to the public health administrators including the Health Minister, Dr Osagie Ehanire, who was represented by Permanent Secretary, Ministry of Health, Mahmuda Mamman, the Chief Medical Director and management of LUTH to prioritize maintenance and supporting services, like stable power, for the facility to serve the needs of the public. She pledged Lions club continued support for the facility.

Minister of Health, Dr Osagie Ehanire, commended the the Lions Club for the kind gesture, saying that it was worthy of emulation. Adding that the project would contribute to the improvement of treatment of renal disease.

The Chief Medical Director (CMD) of LUTH, Prof Chris Bode, while appreciating the Lions Club for donating the state-of-the-art Dialysis Centre and Renal Institute gave a glowing tribute to late Lion Isaac Olusola Dada for laying the foundation for a legacy. According to him the first dialysis centre at the hospital and in Nigeria built 40 years ago had become grossly inadequate and dilapidated, in need of urgent replacement, by the time Lion Dada came to inform him of Lions Club intention to provide the centre.

The CMD noted that the facility being donated to LUTH is the largest dialysis centre and nephrology institute in West African sub-region. Adding that the centre was the biggest philanthropic donation to LUTH till date.

‘We are hoping to commence renal transplantation using the facility. We will be attending to over 1,000 dialysis sections a month when we fully commence. I am proud to be part of the making of history by the International Association of Lions Clubs District 404A1.

‘I commend Lions Club for using LUTH for the project. Just like Dada did, even if you are dying tomorrow, plant an apple tree today, somebody will need it for survival. He did not live to see the Promised Land, his family rose to take on the gauntlet, hand-in-hand with the Lions Club District 401-A1 to commence and finish this magnificent edifice in record time,’ the CMD stated.

The wife of late Olushola Dada, Mrs. Omolola, said that her husband was convinced that Lions Club could contribute to reducing needless deaths occasioned by paucity of functional infrastructure accessible to the common man.

‘What my husband had always desired was to serve his country and humanity and it pleases God to honour him this way. His children and I are extremely proud of all his accomplishments and today’s honour albeit posthumously’.

Omolola thanked everyone who contributed time, treasure and talentst in making the completion of the project a reality.