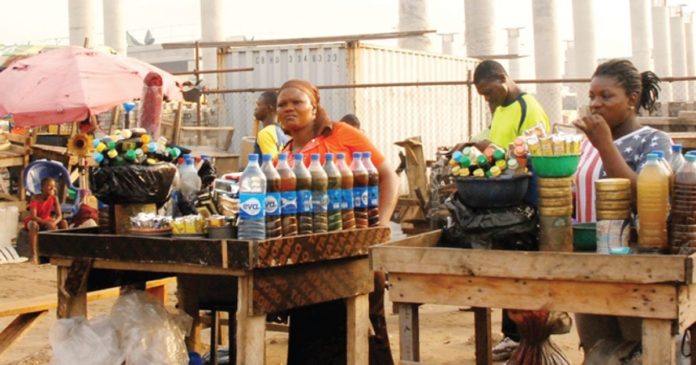 Low back one shot

Backline one shot, and

This shot is neither injection nor tablet dose; It is the familiar line you hear at paraga joints; where herbal roots, leaves and stems are soaked and fermented with local gin and ethanol. The last one ‘draw’ serves the purpose of sticking the herbal concussions together for one gulp by one person.

Paraga joints are everywhere in Nigeria, particularly in the high-density areas. They are in motor parks, markets, residential streets and even in industrial areas, where they serve the casual and low grades workers with shots.

Business starts as early as 5am at paraga joints. The early patrons; drivers and conductors, touts and their principals in the National Union of Road Transport Workers do the paraga business before the main business of transporting commuters from one destination to another. No dull moment for paraga vendors in the early morning rush as low lifers join the drivers and the conductors to start the day on a ‘high’ note. The touts and their Ogas saunter in and out of the joints to hold the fort before the drivers and conductors return, if they are able, from their ‘round tripping’ to top up.

The joints in the residential streets meet the alcoholic needs of the jobless youth, adults and urchins in the area. They assemble early in the morning, gulp some stuffs, retreat around noon to return in the evening to join low level workers, for unwinding. The paraga joints in industrial areas are to ‘energize’ the labourers before they clock in for the day’s job.

Now, we have mobile paraga vendors. These ones take the stock to mechanic workshops, sawmills, building sites, political rallies and other places where there are congregation of people. Many of them get the stocks depleted on the road side by one off consumers before they get to the real customers.

Herbal medicines have good values in treating many diseases including infectious diseases either endemic or pandemic proportion, hypertension, acupuncture, bones, stomach pains etc.  That natural remedies can save lives, particularly in the developing countries, is undoubtful.

Nigerians returned to herbal remedy, using medicinal plants roots, stems, leaves and fruits to fortify themselves at the peak of Corona Virus pandemic. There was increased consumption of ginger and garlic both in liquid and solid form. Lime and Lemon with hot water became the preferred drinks of the lockdown period. Concocted herbal foods and drinks became popular menu among families.  Such was the belief of the Africans in herbal remedy to confront the pandemic threat.

Herbal medicines have their peculiar challenges. They may no longer be primitive; however, they are still far away from orthodox medicine standard. Herbal medicines need to undergo scientific clinical trials to determine safety, efficacy, dosage and side effects, else a large room for abuses is created.

Paraga is herbal mixture abused. The fact that many water based paraga mixtures never get patronized by customers is an indication that most paraga patrons are alcohol abuser. They consume high concentration of alcohol in the name of herbal medicine.

Imagine one person taken as many as seven glass shots of herbal mixture, made with 60% local gin and ethanol to start work every day; such person is certainly not treating ailments but getting addicted to alcohol. And we all know the consequences of addiction.

Paraga drinkers develop physical and psychological dependence on the substance just like any drug addict. Their lives start and end with paraga. Continuous craving for the substance leads to insomnia and dehydration. They look unkept and their breaths including skin pores reek out alcohol all the time. Like drugs, paraga makes the drinkers feel they are in a world of their own typically looking aggressive once the craving is on and extremely careless about physical appearance or conduct in the public.

Addiction to paraga have grave consequences for the consumer and the society at large.  Federal Road Safety Commission (FRSC) asserted that 90 per cent of road accidents in the country was as a result of alcoholic drinks, hard drugs among others.   A driver who consumed paraga before getting behind the wheel is not likely to have  good judgements on the road.

Parga drinkers are generally hard looking individuals. They form themselves into armies of ‘life means nothing’ soldiers. They are readily available for any disruptive activity, either as pawns in the hands of politicians or Alright sirs for seemingly well to do individuals.

The involvement of underage/ teenager in the consumption of Paraga is worrisome. They are in such a large  number to constitute themselves into hoodlums or terror groups, unleashing mayhem and violence on the society. As of today, there is no urban area without its own hoodlum group. Some areas even have more than one. These are some of the social fall out of paraga addiction.

The health consequence of paraga addiction is bigger and more dangerous for our future. Ailments such as Liver diseases; Pancreatitis; Cancer; Ulcers and gastrointestinal problems; Immune system dysfunction; are some health challenges that alcohol addiction injects into the body system.  Other alcohol induced ailments include Brain damage; Malnourishment and vitamin deficiencies; Osteoporosis; Heart disease; Accidents and injuries. Many of these ailments are fatal in nature.

The concern of every right-thinking Nigeria, particularly stake holders in the health sector, should be how to tackle the menace of paraga. Because if we don’t, a bigger disaster is waiting to happen in the health sector.  In a not too long time from now, the signs and symptoms of paraga induced ailments will be too rampart for Nigeria’s health facility to cope.

To tackle the menace of paraga, we need to know what makes people patronize paraga. Poverty appears to be the main factor.  N50 worth of paraga will give more ‘high’ effect than N500 beer. As more and more people are dropping to the lowest rung of the economic leader, their standards of living follow in the same direction.  Thus, a man who is use to taken few bottles of beer to unwind, adjust his body system and taste buds to paraga shots. Paraga is surely affordable. With as low as N100, you can take more than 5 shots of assorted mixture to charge up.

The fight against paraga is neither physical nor spiritual but economical. Let us fix the economy, give jobs back to people today, paraga patronage will shrink by over 50%.

The Essential Spices to keep your home healthy

Covid19; Keeping the immune System active with the herbs

Covid19; Keeping the immune System active with the herbs

The Essential Spices to keep your home healthy